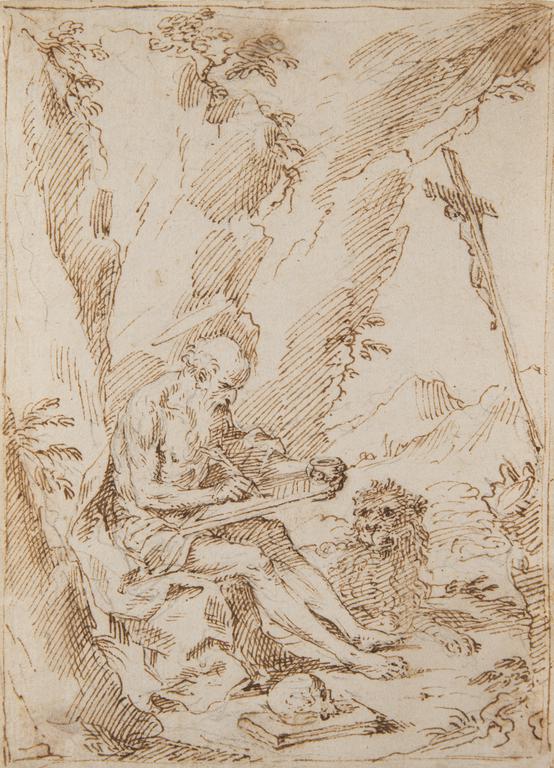 The drawing is striking for its excellent quality, the conciseness and reliability of the line, evident in the characterization of the head, where wrinkles and shadows are part of the same play of lines, while the light and the smooth, high forehead depend on the reserve of the paper. A beautiful drawing speaks for itself : this one expresses the age and concentration of the saint (and perhaps of the artist projecting himself in his drawing), the appeased confidence of the lion, the heat of the afternoon.

It is also a very balanced, calculated drawing. At the precise point where the rock goes behind the saint, his clothing seems to extend it and carve its folds into it. The ellipse of the halo stands out masterfully against the rock. The crucifix exactly cuts off the horizon (and metaphorically, the mental horizon of the saint), thanks to the artifice of attaching it to a stump of dead wood – while from the rock where Saint Jerome is sheltering, the vegetation starts again. First sketched in black chalk, the drawing ends with a framing line.

His style indicates an artist formed in the school of the Carracci, particularly Agostino Carracci, but announcing the elegant classicism of Guido Reni. From Reni, the Saint Jérôme (1635) in the Kunsthistorisches Museum in Vienna has an opposite but comparable layout, with an opening on which the blond angel, who inspired him, stands out. Saint Jerome is writing in a book and not, as here, with a rare and remarkable concern for verisimilitude, on a tablet.