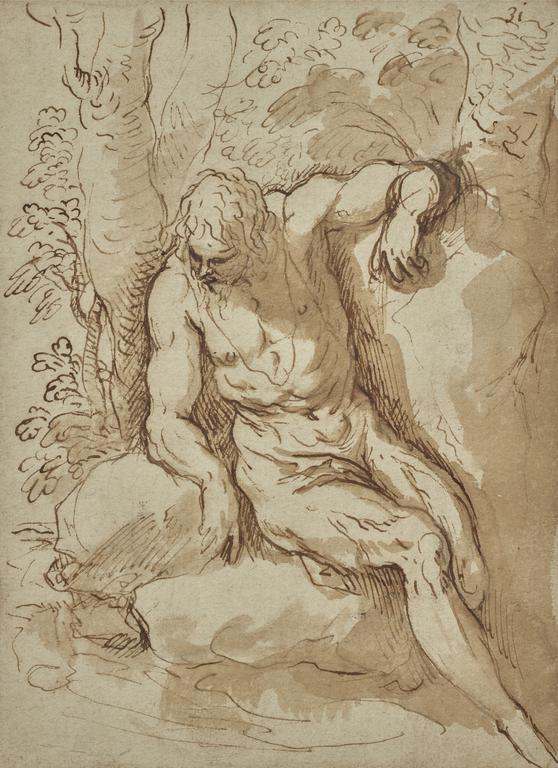 Saint John the Baptist in the Desert

After Tintoretto's death in 1594, Palma Il Giovane became the most desired painter in Venice. This drawing, of an exceptional originality and quality, can be dated to the 1610s (by comparison with the Baptism of Christ in the Morgan Library in New York, dated 1613).

Originality because Saint John the Baptist, contemplating the water of the Jordan in which he will baptize Christ, is not endowed with any of his usual attributes. We see neither the animal skin, nor the lamb, nor the cup that he uses to quench his thirst and soon, to baptize Christ – all the elements that we find in an engraving by the artist of which this drawing, in reverse, could be a first thought. This Saint John the Baptist is a Christian avatar of the ancient Narcissus, a subtle re-use typical of the Italian Renaissance.

The style, however, is the one of the last breath of this Renaissance, the mannerism – and almost the baroque. Palma Il Giovane had illustrated, in 1611, a collection of anatomical models, De Excellentia et nobilitate delineationis, in which, as in this case, the force of Michelangelo and the realism of the Carracci are combined. Rubens, after his return from Italy in 1610, also adopted this almost embarrassingly realistic modelling of the flesh, far from the ancient canons.

The quality of the sheet is due to its freshness (which could also be attributed to its excellent state of preservation), the fluid line and the perfect application of the wash contributing to the evocation of water and shadow, rock and foliage, a concise and very attractive depiction of the nature surrounding Saint John.

This drawing was owned for a long time by Eric Stanley, Tolkien's successor at the chair of medieval literature at Oxford University. Great collector of drawings and engravings, he crisscrossed, still in his nineties, the churches and museums of Italy looking for, as here, the rare emotion.