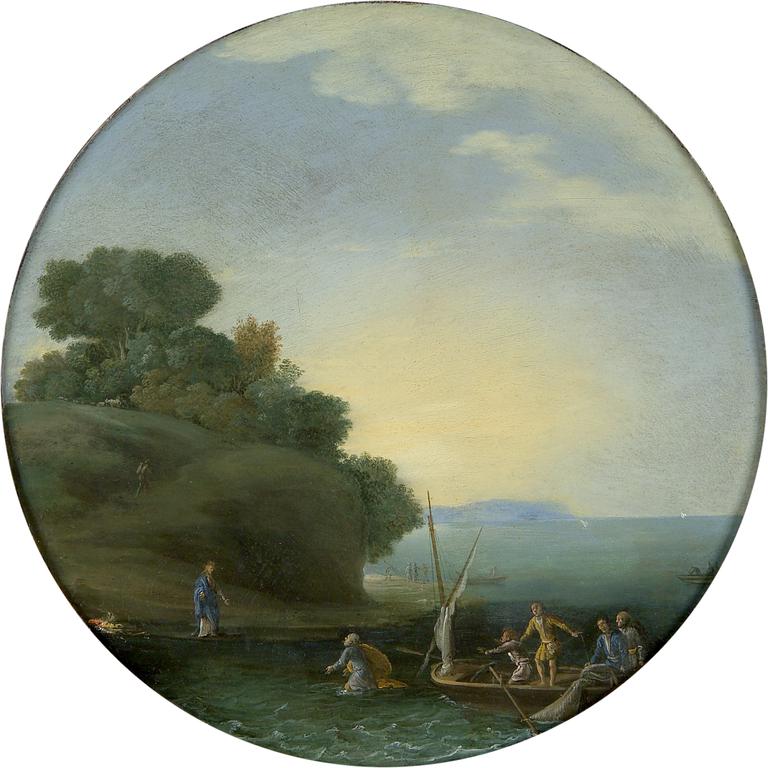 The Apparition of Christ at Lake Tiberias

In his 1995 article, Marcel G. Roethlisberger, the best specialist in this field, attributed this work to Goffredo Wals. Reappearing in 2011 in a sale described in a blog as "a game of massacre demonstrating the effects of the crisis on the art market", it was then attributed only to Wals' "entourage". This hesitation can be explained. Wals, rediscovered only in 1969, is still poorly known. Born in Cologne, he was one of those artists who sought inspiration or commissions in Italy – and sometimes settled there. He lived mainly in Naples, but also in Rome from 1616 to 1618, and in Genoa from 1630 to 1632.

Marcel G. Roethlisberger already noted a delineation of forms, a presence of characters more achieved than usual in this painter, whose stylistic personality has, since, become clearer, in the sense of a minimalism, sometimes a dryness, that we do not find here, where water, greenery and sunshine spread out. But what do we know about Wals' "entourage" ? In Rome, from 1616 to 1618, he worked in Agostino Tassi's studio. In Naples, from 1620 to 1622, it was Claude Lorrain who worked in his studio – then, back to Rome from 1622 to 1625, in Tassi's. It is within this triangle that our painting is situated, rather in the Lorrain's angle : the glow, the foliage sometimes gilded, the shepherd on the slope and his flock at the edge of the grove...

We know nothing today of his production before 1627 and his return to Rome, after a brief return to Lorraine. But in a painting (Switzerland, private collection) datable to 1625-1627, and considered by Le Lorrain, for the architecture and the landscape, and by Tassi, for the characters, we find the "cascade" of trees, falling from the left, a flat sea but animated by ripples in the foreground, and the spindly characters in the background. We can also consider the fire lit on the shore. It recalls the Landscape with a Scene of Witchcraft by the same Tassi of 1625-1626 (Baltimore, Walters Art Museum). It also specifies the episode depicted : not, as has been written up to now, the vocation of Saint Peter, but the appearance of Christ at Lake Tiberias.

This glow is therefore the dawn : the Dawn that Elsheimer painted in Rome in 1606, on a small copper painting (Braunschweig, Herzog Anton Ulrich Museum) that revolutionized landscape painting. The dawn, perhaps, of a work, Claude Lorrain's one, which found its climax in 1656 in another landscape of the Holy Land, with again, in the background, the Lake of Tiberias : Le Sermon sur la montagne (The Sermon on the Mount - New York, Frick Collection).