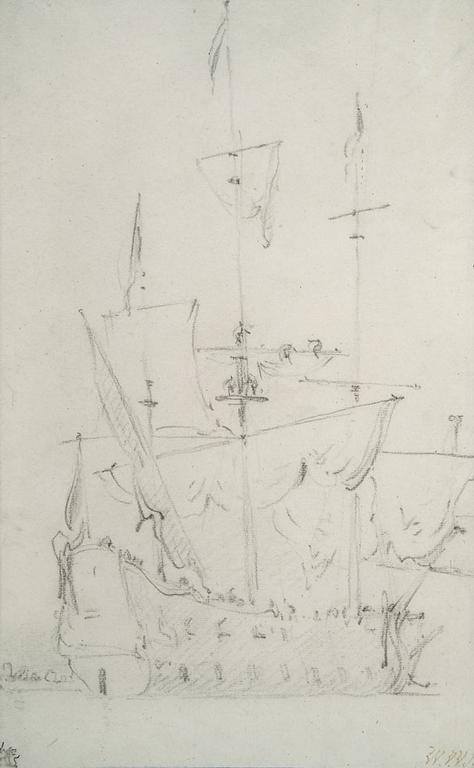 Van de Velde the Younger is, with van de Capelle, one of the two great Dutch marine painters of the 17th century. His fame having been constant, many of his drawings, when they were not spoiled by early humidity, were spoiled by their exposure to light. Outside the National Maritime Museum in Greenwich and the Boijmans Van Beuningen Museum in Rotterdam, they are quite rare, and even rarer are those that survive in a good condition.

His father, Willem van de Velde the Elder, painted grisaille (ivory-colored) seascapes in pen on wood or vellum. His younger brother, Adrien, abandoned the sea to paint some of the most beautiful pictures of the Dutch Golden Age. His early death at the age of thirty-six, in 1672, may have motivated both Willems, father and son, to move to England. The same year began the third and last Anglo-Dutch war (and the invasion of Holland by Louis XIV), at the end of which, in 1674, they officially became "painters to the navy" of Charles the Second.

This drawing probably dates from the beginning of the previous war, in 1664. The Dutch fleet was based throughout the autumn in the bay of Goeree, the northernmost of the four arms of the Rhine that surround the province of Zeeland. A painting by the same artist, in the Thyssen Museum in Madrid, shows a part of this fleet. The three-master in the center of the composition, David's Three Valiants Knights (a name that reminds us how bible reading impregnated 17th-century Holland), presents many similarities with our own.

The ship is at anchor, sails furled, awaiting the review or the visit of some dignitary. On the yards, small figures are busy. On the starboard side, a boat slides. The whole drawing conveys an atmosphere of calm, through the balance of the composition (whose orthogonality is, to our modern eyes, a reminder of that other Dutchman, Mondrian), but also of life, through the quivering of the line. It was those qualities that caught the eye of the dealer and collector William Mayor. From 1826 to his death, in 1874, he was a leading figure in the world of drawing. "He reserved for himself – Frits Lugt says – a choice of the best drawings that passed through his hands", and in the preface to the catalogue of his collection, he declared that he had restricted himself to "a few authentic and selected specimens of each great masters".