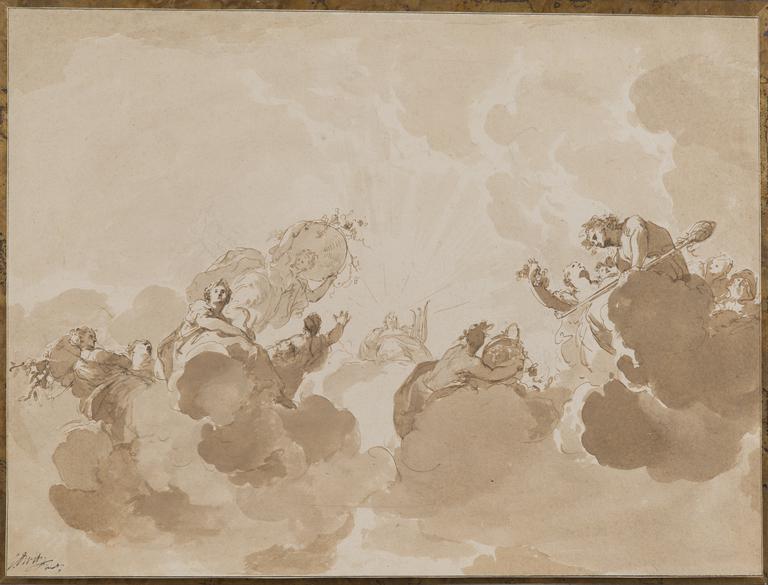 Apollo and the Four Seasons (?)

After the accession of William of Orange to the English throne in 1689, his death in 1702 without being replaced as Stadhouder, and the Treaty of Utrecht in 1713, which concluded the War of the Spanish Succession (in which the United Provinces had played only a small role), Amsterdam entered into a period of splendor and decline. The energy of the Golden Age was gone but the accumulated capital transformed Amsterdam into the first financial center in Europe. The patricians built and decorated mansions in the city and manors in the country as, in the 16th century, the Venetian patricians constructed palaces along the Grand Canal and villas on the countryside.

A Venetian painter, Pellegrini, who stayed in the Netherlands from the end of 1716 to the end of 1718, brought with him the lightness of his touch, the refinement of color, and the architectural sense inherited from Veronese. Jacob de Wit was inspired by him and until his death in 1754, he was the most requested Dutch painter, the wealthiest. But, unlike Giambattista Tiepolo, his exact contemporary, he did not run a studio or travel. Busy with commissions for wall or ceiling decorations, his reputation did not cross borders, except through his drawings, which he usually signed.

This drawing, its breadth, airiness, and fluidity, reach a point of perfection which permit us to date it probably in the last years of his career, around 1750. It was in the personal collection of Johan Quirin van Regteren Altena, one of the great Dutch art historians of the last century, who was director of the Rijksmuseum's drawing room from 1948 to 1962. A very similar drawing, especially considering  the left side, is in the P.&N. de Boer Foundation in Amsterdam.

Supposedly depicting Apollo (recognizable by his lyre) and the four seasons, we may question, given the difficulty of identifying each of the four seasons in the figures assembled differently from one drawing to another, whether the subject is not rather, or also, the sun (Apollo) and the fruits of the Earth. As usual in ceiling decorations, Jacob de Wit situates the main figure in the center, but in the background, a typically Baroque arrangement that creates depth and keeps the viewer interested.