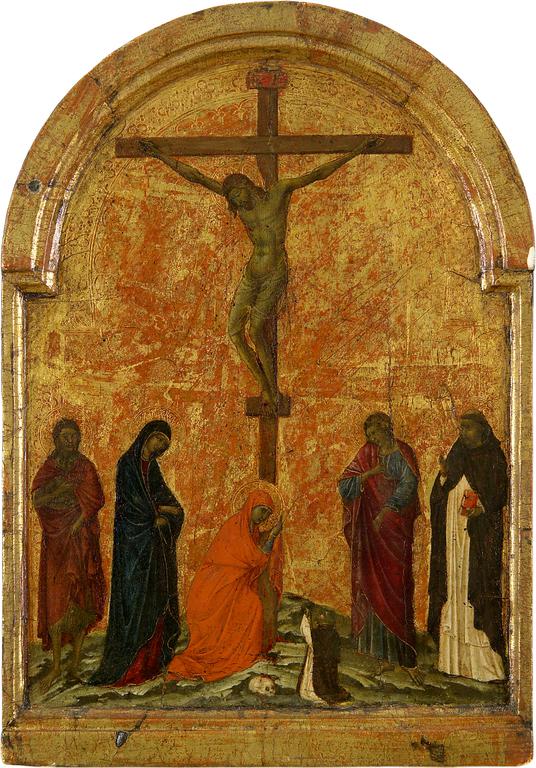 This panel, whose attribution to Ugolino di Nerio had been confirmed by Professor Luciano Bellosi just before his death in 2011, is an extraordinarily refined work by this immediate disciple of Duccio, remarkable for the nobility of the attitudes, the elegance of the lines, the charm of the color. Not much is known about Duccio's activity between the completion in 1311 of the major work of Sienese painting, the Maesta (Museo dell'Opera Metropolitana del Duomo, Siena), and his death in 1318 or 1319. The Maesta had mobilized the studio and provided Duccio's various pupils with a common repertoire that each would interpret in his own way, sometimes not easily identifiable : there would be many talented painters in Siena, until the Black Death of 1348. But there were few who knew how to place the figures in space, as here, while unifying the composition through the interaction of looks and gestures (for example, the parallelism of the arms of the two Saints John).

The painting must date from the 1310's. Indeed, the halos and the decoration of the surrounding area were done freehand and not punched, which is generally no longer the case after 1320. It is probably the central part of a small triptych for private devotion, commissioned by the modest donor kneeling in front of the skull of Adam, at the foot of the cross. The presence of Saint John the Baptist, patron saint of Florence, and Saint Dominic, next to the Virgin Mary and Saint John the Evangelist, suggests that this may be Fra Baro Sassetti, prior of the Dominican convent of Santa Maria Novella, who died in 1324. This Florentine convent already owned Duccio's Rucellai Madonna (Galleria degli Uffizi, Florence) and probably commissioned a polyptych, now lost, from Ugolino di Nerio in 1320. The figure of the Virgin, as well as the mound on which the cross is erected, are taken from a triptych by Duccio and his studio (collection of the Queen of England) dated from the first decade of the century.

In harmony with its purpose, it is more a meditation on, than a representation of, the Crucifixion. The Virgin and the saints are separated from Christ. Saint John the Baptist in the front and Saint Magdalene in the back look at the viewer and bring him mentally into the scene. The gold background is original and reveals the base of the Armenian bowl in orange-ochre color. The paint layer is in good condition. Sign of an important commission, the reverse was coated with a linen cloth and painted black.