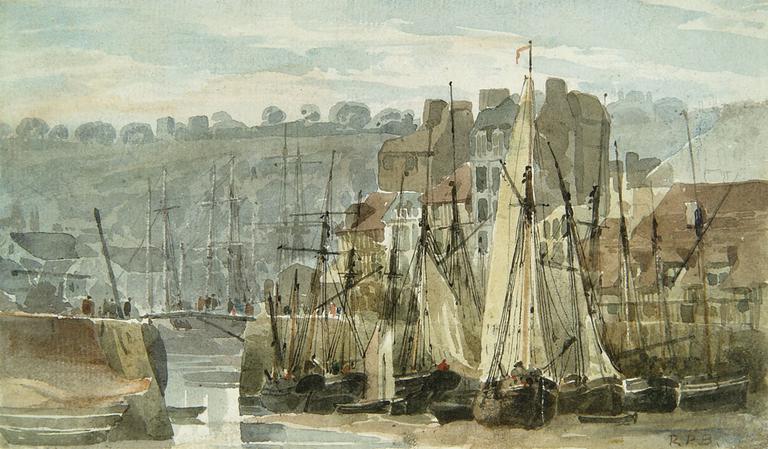 Forty years later, his friend Delacroix would remember him in these terms : "It was around 1816 or 1817. He already had a surprising skill in this genre. No one in modern school, and perhaps before him, has achieved that lightness of execution which, particularly in watercolor, makes his works a kind of diamonds which the eye is flattered and delighted by, independently of any subject and any imitation" (Correspondance, 30th November 1857).

It is interesting that this comment is written for Théophile Thoré, the "discoverer" of Vermeer, the first to exalt the View of Delft, with which this watercolor, as well as more generally the Romantic movement and Dutch painting, share some affinities. Even more interesting is the final remark : "independently of any subject and any imitation". Delacroix already perceived the abstract quality, eminently modern, of this work which suggests Paul Klee, that other genius of watercolor : same discreet color, same obvious transparency like a solved equation.

A month later, Delacroix wrote about Bonington : "This hand so skilful that it was anticipating thought." (Journal, 31st December 1857). We think of Keats who, in the same year 1817, wrote the famous line : "A thing of beauty is a joy for ever"... and who also died at the age of twenty-five. Or to Mozart who at the same age, fifteen, in the overture of La Betulia Liberata, "achieved true musical greatness" (H.C. Robbins Landon, Mozart Essays, London, 1995). This work, in perfect condition, is a rare example of the purest romanticism and the possibilities of a precocious genius.