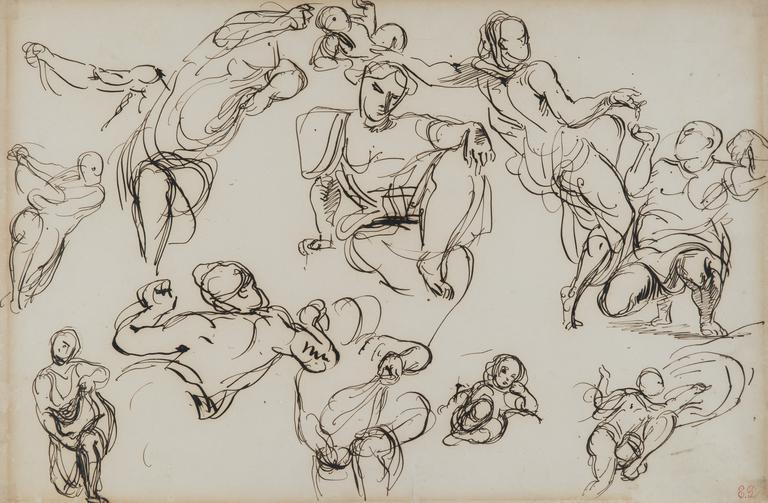 We said about Delacroix that he is "the last of the Renaissance and the first of the Moderns". This is what this sheet of studies shows superbly, combining the grace of Raphael, the strength of Michelangelo, and (in the admirable arc of the two convex figures at the top of the sheet) the freedom of Matisse's Dances, two generations ahead of his time...

The Palais-Bourbon, property of the Prince de Condé, was acquired by the State in 1827, in order to definitively install the Chamber of Deputies. The hemicycle was completed in 1832 and Delacroix was commissioned to decorate the Salon du Roi in 1833. This was his first public commissions before several others as the libraries of the Palais-Bourbon and the Palais du Luxembourg, the Galerie d'Apollon in the Louvre, the Salon de la Paix in the Hôtel de Ville (which burned down in 1871) and the Chapel of the Holy Angels in the church of Saint-Sulpice. It is also the only one that he realized without the help of his students.

More than easel paintings, these large-scale decorations required numerous studies and sketches, due to the multiplication of the figures and the insertion of the composition into a predetermined architecture. As often in art, constraint is a source of creative inspiration, and many of these very free experiments are not found, or not exactly, in the final work.

The Salon du Roi displays an allegorical frieze above the three semicircular arches of each of its four walls, representing, respectively, Justice, Agriculture, Industry and War. In the friezes of Industry and War in particular, we can distinguish characters very similar to the figures in our drawing. The most accurate is the convex figure on the left, with his right arm stretched above his head, which is found above the central arch of the War (as well as in a drawing from the Karen B. Cohen collection exhibited in the Delacroix Museum, in 2009-2010).

Concerning the central figure, to the best of our knowledge, we don't find it in any finished work, but in a drawing in the Louvre Museum (no. RF 9943), also related to the Salon du Roi.