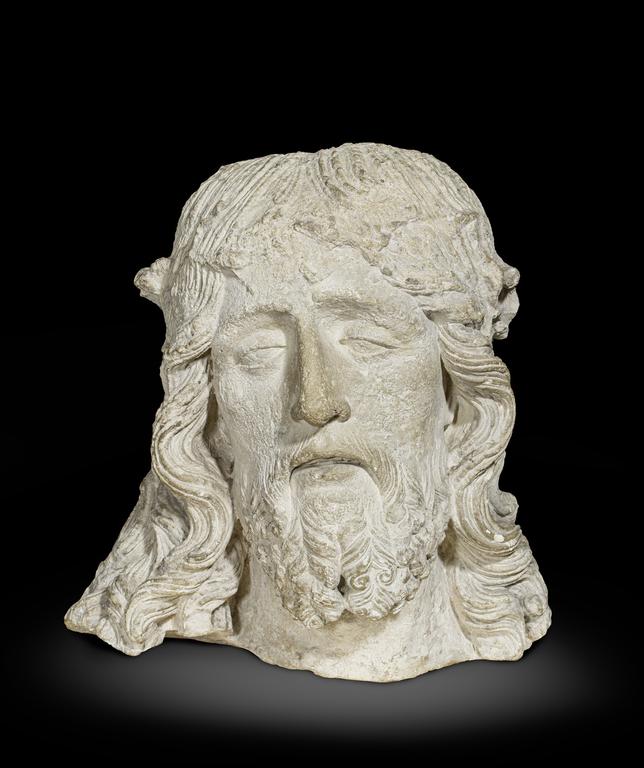 This elegant and expressive head of Christ can be compared to a bust published in 2007 by Pantxika Béguerie-De Paepe, from the church of Saint-Vulfran-de-la-Chaussée in Abbeville, now in the Boucher-de-Perthes Museum, and dated to around 1520. It has the same long, sinuous hair and symmetrical, neat beard.

The iconography is the Christ in bonds, at the moment when, having climbed Golgotha, or the Hill of Calvary, he is sitting at the foot of the cross erected by his executioners. The style is late Gothic, but this head, certainly in better condition than the bust mentioned – was probably more sheltered, inside a chapel – seems more finely chiseled, more human, as if this work was touched by the breath of the Renaissance, which, in Picardy, owed more to the currents coming from the Netherlands and the Rhine Valley than from Italy.

It belonged for a long time to the painter Maurice Denis in his house, now a museum, at the Prieuré in Saint-Germain-en-Laye. A photograph shows him, aged about 60, around 1930, in his library where the Head of Christ is placed in a high niche. From the Nabis to an art all in flat tints, and from symbolism to sacred art, he wrote about medieval art that what we affect us is "what it possesses in itself of profound Christianity, this sincere, naive, virginal, humbled attitude" (Nouvelles théories : sur l'art moderne, sur l'art sacré, Paris, 1922). This sculpture is the illustration of that declaration, perhaps its inspiration.