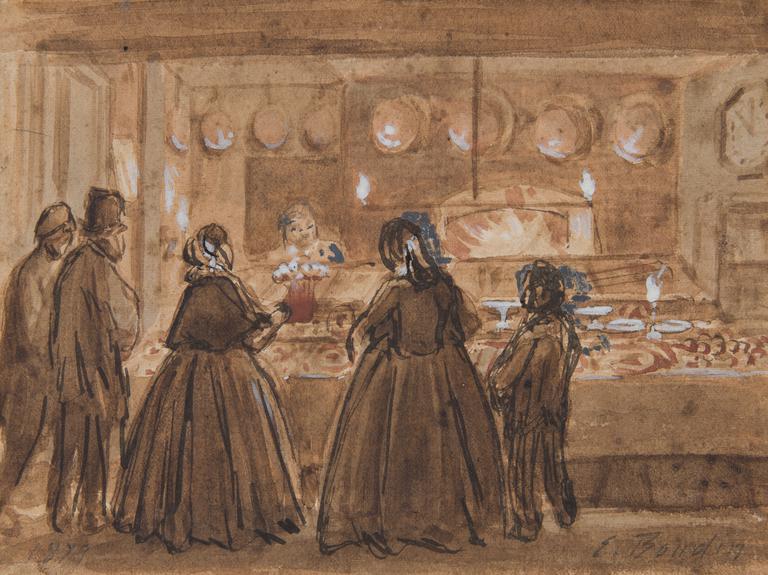 Impressionism, rejecting academicism, had to "reinvent" the drawing, basis of the creation. There, like in painting, Boudin shows the way.

Baudelaire, who admired him (but first for his landscapes) and frequented him in Honfleur, asked to the Peintre de la vie moderne (title of an 1863 essay to which Constantin Guys, now forgotten, served as a pretext) to extract "the mysterious beauty" contained "not only in gestures and manners, but also in the positive form of the face". Consequently, the unforgettable face of the little baker behind her stall is very far from the idealized ovals of Ingres...

The novelist and critic Edmond Duranty, taking over from Baudelaire, wrote in La nouvelle peinture (in 1876) : "What we need is the special note of the modern person, in his clothing, in the middle of his social habits, at home or in the street (...). With a back, we want to reveal a temperament, an age, a social condition". This is exactly what Boudin does here, capturing the customer, and particularly the worker wearing the cap and the fisherman with the bonnet.

This "on-the-spot" aspect is accentuated by the luminous vibration of the oven, the gas jets and the reflections on the coppers, and the clock that indicates precisely eleven o'clock. However, the spontaneity of the line does not exclude the attention to composition. The garland of heads echoes the frieze of utensils, the verticals and horizontals delimit and give credibility to the space.

The great majority of Boudin's drawings reached the Louvre after his death in 1898. Only a few of the drawings that the artist sold or gave away during his lifetime remained in private hands, and this one, with its original subject and refined treatment, is even rarer.