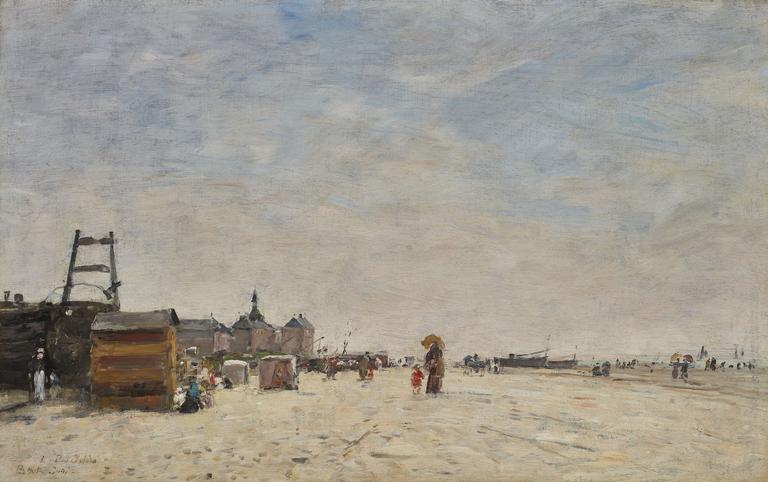 By The Sea : Paintings by Eugène Boudin & His Fellow Impressionists (Philadelphia, The Philadelphia Museum of Art, 1991).

In 1890, Boudin was finally (at the age of 66) an "established" painter. Since 1881, Durand-Ruel was his dealer, who exhibited him at the United States, and in 1889, he won a gold medal at the Universal Exhibition.

After the beach scenes, with which he had initially sought success, after the port views (Antwerp, Bordeaux) which punctuated his first journeys outside Brittany or Normandy, he paradoxically turned to more humble subjects, in a more clearly impressionist vein, but also naturalist.

This view of a beach in Berck shows with the same attention the cabins of the vacationers and the fishing boats, the woman on vacation protecting herself with her parasol and the fisherman's wife recognizable by her white bonnet. Behind this woman, a typically local boat, with a flat bottom, very wide at the front (where the mast was located), equipped at the back with a portico (la miche) on which the mast could be folded down and an arch (l'overloppe) on which the mainsheet slid, from one side to the other.

The sky takes the most important place, almost three quarters of the painting, and contributes, with the beach, to structure it in three horizontal bands of a blue, grey and yellow that are also pale and nevertheless luminous. In 1865, after a visit to the Louvre, the painter noted in his Carnets, about Guardi : "Lightness of their execution. Spirit of the touch to the smallest details" and proposed as an objective "the memory of Guardi with a more natural accent". This is exactly what he achieves here, but we can also think, in today's art, of Sean Scully's color bands...

This painting remained from 1965 to 2018 in the Dorrance family, shareholders of Campbell Soup : initially "Jack" Dorrance, president of the company from 1962 to 1984 and of the Philadelphia Museum of Art from 1986 to his death in 1989 ; then "Dodo" Hamilton, his horticulturalist niece, billionaire and philanthropist.