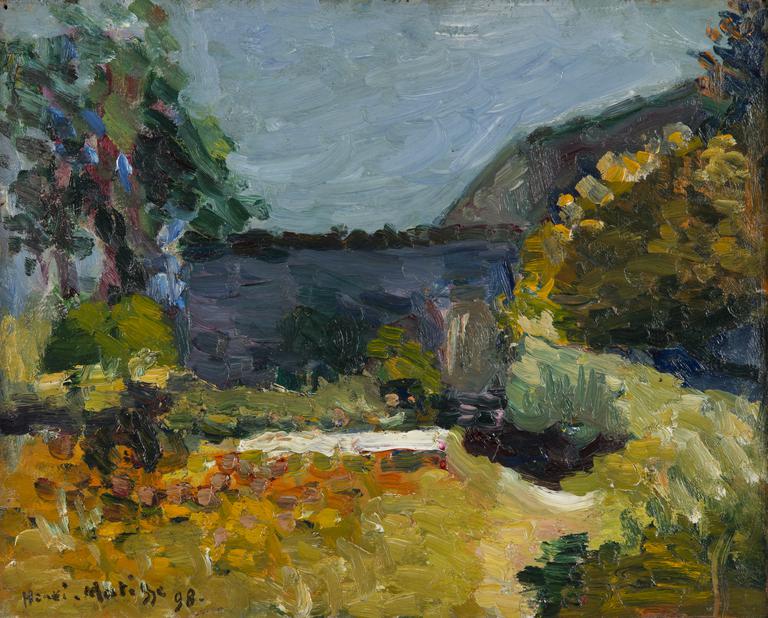 In 1898 Matisse (born on 31st December) was 28 years old. He married Amélie Parayre on 10th January, and after a brief stay in London, the young couple spent several months in Corsica, in a suburb of Ajaccio. Matisse painted about fifty small paintings, often views of the surrounding countryside.

Like Paul Klee's trip to Tunisia in 1914, this trip introduced Matisse to what he called "the passion of color. "It is there that Matisse experienced the first shock that will determine Fauvism, he told me", noted the great collector Pierre Lévy (Des artistes et un collectionneur, Paris, 1976).

Matisse perceived it as a liberation. The light floods the painting, drowns the forms. The orange of the vegetation, a rather unusual color, contrasts with the deep blue of the building. The winding path recalls another painting in the series, Le Portail du vieux Moulin (The Little Gate of the Old Mill - private collection), purchased by Leo Stein in 1906, after he and his sister Gertrude had discovered Matisse at the Salon d' Automne in 1905.

The first owner of this painting was Charles Bourgeat, a lithographer and gallery owner whom Walter Pach (another Matisse's friend, who engraved portraits of both of them), would later remember about Bourgeat : "too quiet and gentle to carve out a place for himself among the giants of the profession, there were wonderful things to be found in his collection" (Fourty years in the world of art, New York, 1938).