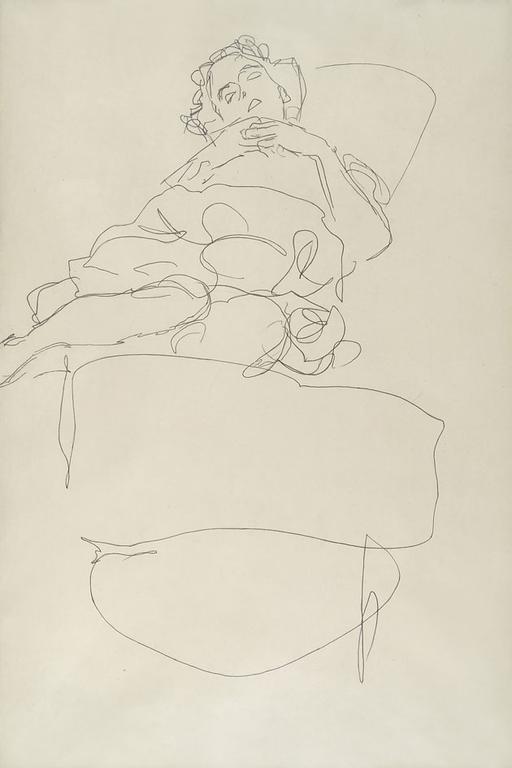 Woman Lying on a Bed

According to Alice Strobl, this drawing is a preparatory study for one of Gustav Klimt's most important paintings, die Jungfrau (The Virgin), completed in 1913 (Prague, National Gallery). However, the very confident and  swirling line, rare in the painter's graphic work, can hardly be found in any of his drawings around 1908-1909.

Klimt met Egon Schiele in 1907. In the following years, he abandoned the aesthetics of the Secession and gave up using gold in his paintings, devoting himself mainly to landscapes and a few large allegorical paintings. But if he influenced Schiele, who was not yet twenty years old, the opposite is also true : Schiele's spirit seems to guide Klimt's pencil here.

We can hypothesize that Klimt seized the opportunity to sketch a friend or a companion – and there were many of them – in an attitude of abandonment evoking either sex or death, sources of inspiration for his painting and more generally for the culture of Vienna at the end of the 19th century – if we admit that the 19th century ended in 1914. He "transformed" her a few years later into the nude woman at the bottom of the group, who can hardly be recognized except by the tilt of her head.

From a moment when the model's willingness meets the artist's availability, a memorable drawing emerges in a few strokes – when many others by Klimt, which must be described as hesitant and almost evasive, are hardly so. We can think, and this is no a small compliment, of Rembrandt, around 1635, drawing Two Studies of a Woman Asleep (Saskia?) (New York, Morgan Library).