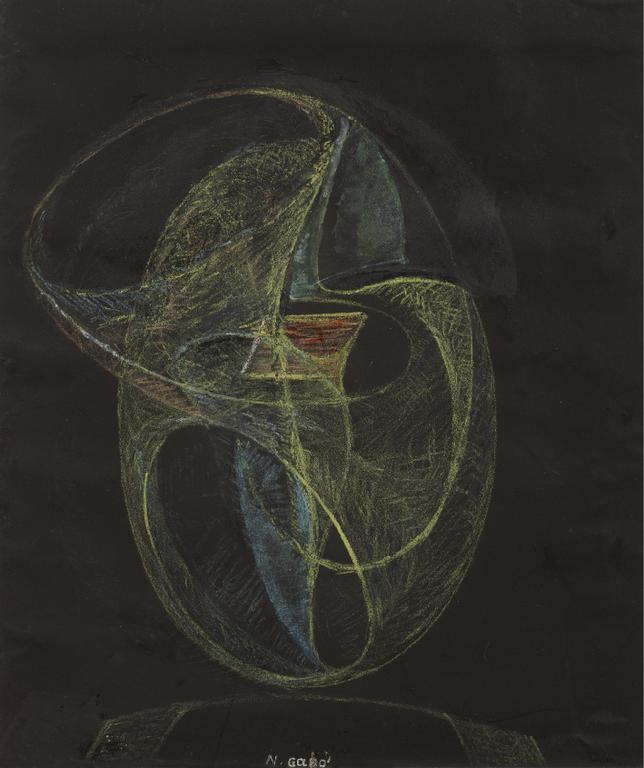 Drawing for a Construction in Space

Rudolf Wittkower concludes his fundamental book What is Sculpture by quoting the Realist Manifesto of 1920, the founding text of Constructivism, written by Naum Gabo and his brother Anton Pevsner : "We deny volume as a plastic form of space (...). We deny, in the sculpture, the mass as a sculptural element". He sees in this the birth of modern sculpture, so different from what was done before that it seems to him "irrelevant", out of the subject of his work in any case.

In other words, Rodin is closer to Michelangelo, and even to prehistoric statuary, than to Gabo. This shows the tension towards the idealized goal, the courage required by Gabo (and celebrated by the great English art critic Herbert Read, who compared him to Abbé Suger "inventing" the Gothic) to impose his vision.

In 1935, a turning point in Gabo's artistic career, he almost lacked this courage. Exiled from the Soviet Union in 1922, then from Germany in 1933, he settled in Paris for three years. At the end of May 1935, he tried to commit suicide. In July, he spent three weeks in London and, in contact with the art of Henry Moore and Barbara Hepworth, found his way back to his own creation. He left for England in 1936, then the United States from 1946 until his death in 1977. Since 1935, some of his works have been exhibited at the Hartford Museum, Connecticut, the most daring of American museums in the interwar period, then in 1936 at MoMA.

It was in this context that he created this magically powerful drawing, which perfectly sums up his less linear, angular art than in the early days of Constructivism, more in flow and curves, which would be Gabo's signature until the end – and which we wonders if it did not influence Bacon.

Its last owner, Harry Grubert, was an economist and senior U.S. Treasury official, recognized worldwide as "the" specialist in international taxation, including the currently crucial subject of taxation of multinationals. The sober complexity of this design must have delighted him...