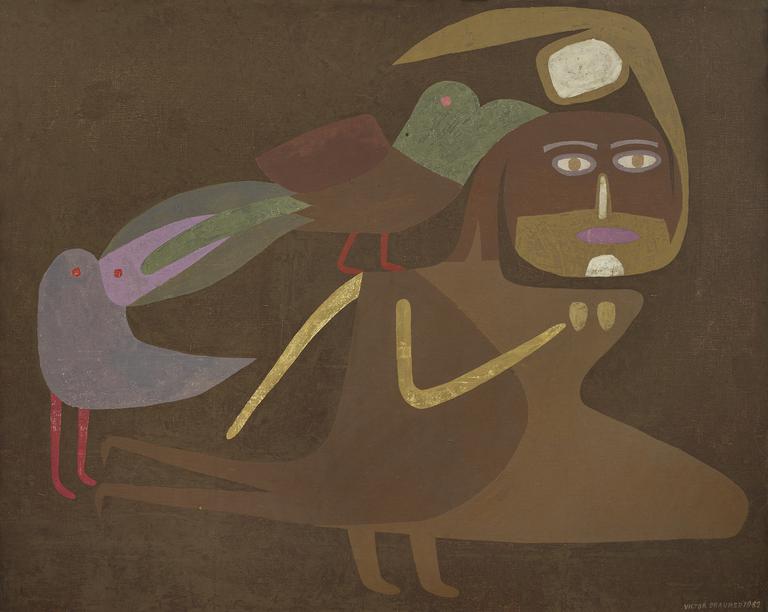 The art critic Philippe Dagen, about the exhibition of the Museum of Modern Art in Paris dedicated to Brauner in 2020, considers him "at least as important "as Yves Tanguy or René Magritte, emphasizing that "he is never satisfied with repeating himself and takes more risks throughout his life".

In 1961, his material situation, until then precarious even though his fame had increased throughout the fifties, was sufficiently improved to buy a house in Varengeville, on the Normandy coast. The photographs of the time show him more relaxed, more smiling. In his last five years, he found inspiration, more than ever, in his inner vision, nourished by myths of ancient civilizations, the analytical psychology of Carl Gustav Jung, but also by his recently acquired collection of primitive arts.

This last influence is evident in the deliberate flatness of the forms, in the brown and gold colors of the main figure, and the more exotic colors of the two birds. The whole composition may refer to the Mesoamerican myth of Quetzalcoatl, the feathered serpent represented sometimes in human form and occasionally accompanied by two quetzal birds.

The oxymoron of the title, voluptuous anxiety, is a renewed form of the exquisite corpse game cherished by the Surrealists. But surrealism, with Brauner, is impregnated with magic, also poetry, which sublimates the paradox. Let us finish with his own words, introducing a collection of engravings of the same year 1962 (codex of a face) : "object, you give me of your survival I give you of my soul and thus we will overcome the death."