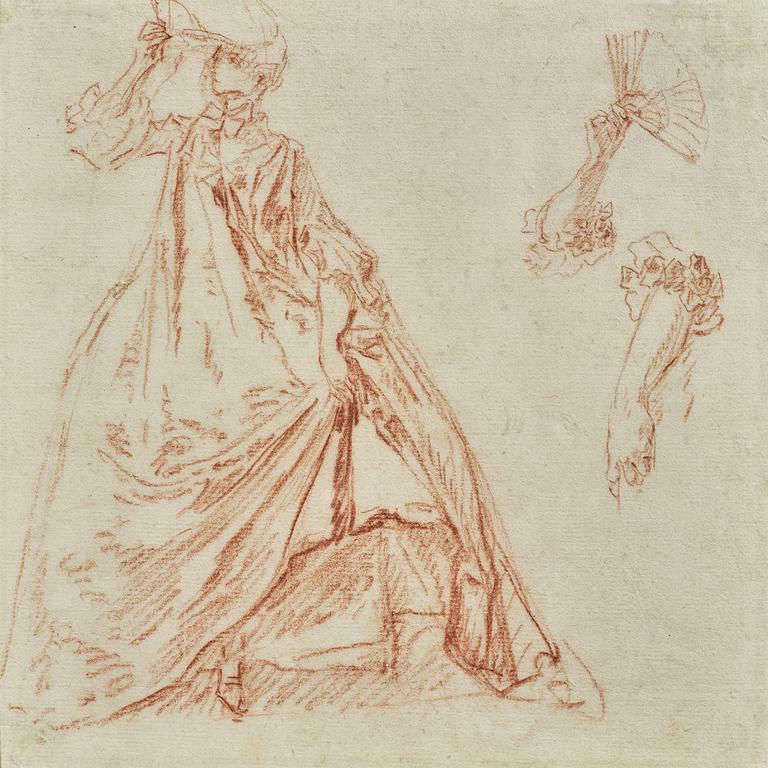 Nicolas Lancret, six years younger than Watteau, was like him a pupil of Claude Gillot and one of the first French painters of genre painting and particularly of "fêtes galantes", typical of the 18th century art and of the "douceur de vivre" whose Talleyrand would deplore, a century later, the loss. More realistic and sensual, less dreamy than Watteau from whom he was first inspired, appreciated by the courts of Versailles as well as Potsdam, his premature death in 1743 marked the end of a genre that would only really revive, in a new way, with Fragonard.

His biographer Ballot de Sovot describes him as drawing "on the spot" : "He only saw models during his walks ; and he often left his friends and went to a viewpoint to draw a group or a figure that he liked" (Éloge de Monsieur Lancret, peintre du roi, 1743). The technique of this drawing is typical of the artist in his maturity : the red chalk applied briskly but with measure, sometimes bold but light, sometimes thin and more pronounced.

It is difficult to say if he met this elegant woman in a park, or if she posed in the studio. In any case, we can recognize her, line for line, adorned in pink and yellow, in one of Lancret's most attractive paintings, Éloge d'une statue de marbre (Praise for a Marble Statue - Rome, Galleria Nazionale Barberini) known today under the clumsy title Le Persan et la statue and dated 1728.

In 1737, the critic Cousin de Contamine described it : "Next to the Persian is a young and graceful French woman. Her head is raised and turned towards the statue which she looks at with as much satisfaction, but with less astonishment. She holds in her right hand her open fan which she puts in front of her eyes to protect them from too much light. And with the other hand she raises her taffeta skirt to let see her petticoat" (Descriptions raisonnées de quelques ouvrages de peinture et de sculpture, 1737).

Concerning this statue, it is Le Soldat bandant son arc (The Soldier Bending his Bow - Paris, Musée du Louvre) by Jacques Bousseau (1681-1740). Bousseau had offered a "model" to Lancret, who had then composed the painting as a gift to him.

This sketch of an admirer of art – "This woman may indicate that there are still true connoisseurs among us", continues the commentator – we can admire it in our turn as a reflection of the curiosity, the civility, the sensuality of the Enlightenment.