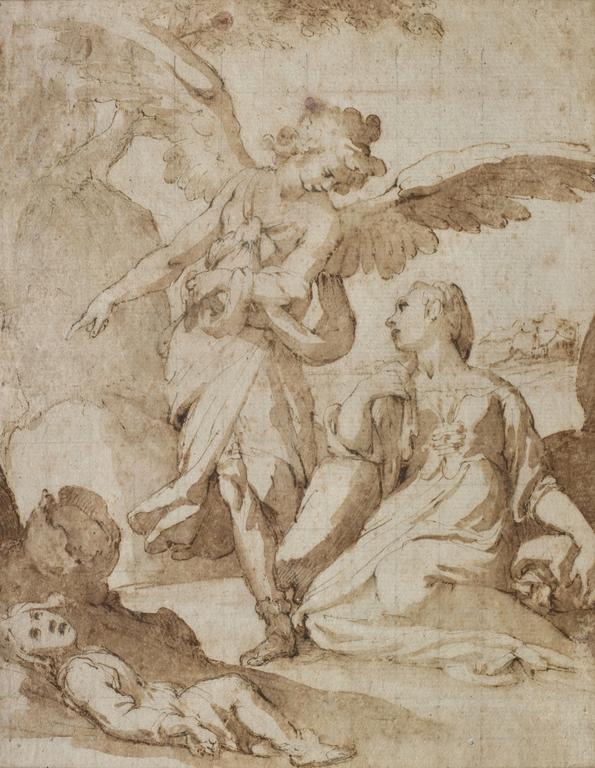 Hagar, Ishmael and the Angel

Knowledge of Germanic drawing in the Renaissance and Classical periods owes much to an exhibition organized in 1982 by Thomas DaCosta Kaufmann, whose catalogue guided the attribution of this drawing to Friedrich Sustris, who was presented as "probably one of the best drawers of his time". His early style, illustrated by an Allegory of Peace (Brunswick, Bowdoin College), is characterized by "the fleeting, unemphasized outlines", and reminds us of Verlaine's verse : a line "sans rien en lui qui pèse ou qui pose". We also find the generous but elegant clothes, the slender hands with curved fingers, of another drawing recently sold at public auction (London, Sotheby's, 9th July 2014, no. 3) ; and a foliage very comparable of a drawing presented in the 1982 exhibition, Venus and Adonis (private collection).

Friedrich Sustris belongs to international mannerism, a trend that crossed Europe from about 1540 to 1600, as did international Gothic around 1400, and which relativizes the notion of a "national" school in favor of " trends" that were very similar from one artistic centre to another. Lambert Sustris was born in Amsterdam and was a collaborator of Titian in Venice. His son, Friedrich, worked in Florence for the Medici, then in Augsburg for the Fuggers, before establishing himself as an architect, decorator and painter for the Dukes of Bavaria in Landshut and finally in Munich. By crossing borders, Mannerism melts styles. In this drawing, we find the memory of Michelangelo (the Madonna of the Tondo Doni) as well as Raphael (in the composition, the grace of the angel) nuanced by a Germanic frankness.

Abraham, after having a son (Ishmael) with his servant Hagar, has another child with his wife Sarah, who was sterile until then. A blended family, but dysfunctional. Abraham sends Hagar and Ishmael back to the desert, where they suffer from thirst. An angel appears and shows them a well. The subject, extracted from the Book of Genesis, is absent in the art of the Middle Ages or the Renaissance. It appeared with the biblical exegesis carried out, from the beginning of the Reformation, by Luther and the Catholic cardinal and theologian Cajetan, in a context where Hagar was perceived less as the rebel, that Saint Paul castigated (Epistle to the Galatians), than a victim benefiting from divine grace – a key subject of the Reformation.

In 1518, in Augsburg, Luther and Cajetan confronted each other. Then, in 1555, the peace was signed organizing a precarious coexistence between Protestants and Catholics in Germany. It is interesting to consider that Friedrich Sustris also made this drawing in that period, between 1568 and 1573, in a still very Italian style.